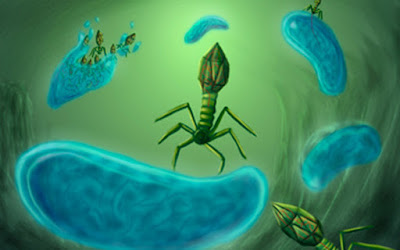 Whether you are being ravaged by C. Diff bacteria, fighting antibiotic-resistant bacteria, or bed-ridden from Lyme disease, it is important to know how health can potentially be restored, and how health is maintained in spite of having potentially disease causing bacteria in your body. If you have not read my previous two articles on this topic you might want to read them as well. (Bacterial Wars, and Targeted Bacteria)

Bacterial wars within the human body have been ongoing since the beginning of time between your body's army of friendly bacteria called probiotics, and the myriad of invading bacteria that cause infectious diseases. The fact that humanity still exists is a testament to the fact that in a relatively healthy body our bacterial army has routinely won the battles against invading bacteria of all types. Researchers now know that every human on the planet has over a hundred species of potentially disease-causing bacteria living in them without causing disease, as long as the overall health of the host person is maintained. It is just one of the roles of our friendly population (army) of bacteria, to control or prevent these potentially bad bacteria from causing disease.

A person might ask, "Why do we suffer so badly from invasions of Lyme bacteria, Clostridium, E. Coli, and Staph if the probiotic army of our body is so good at killing the bad bacteria?" In my previous two articles I discussed how depleted our army has gotten from the overuse of antibiotics, and other things that kill the very bacteria that sustain us on every level.

Mainstream medicine's response to infections is to set off what is essentially a nuclear bomb inside the body, when they use powerful antibiotics which kill everything, your army and the invaders. With antibiotics, your life-sustaining bacterial collective and army is decimated, and your body is a wasteland of damaged tissues, mutated bacterial remnants, and altered biochemistry. Of course there will always be situations where chemical antibiotics must be used to save life and limb, however with a healthy body combined with a good beginning treatment strategy, no type of infection should reach the point where antibiotics are needed.

Antibiotics in my mind should only be used as a last resort. Antibiotics have undoubtedly eased suffering and saved lives in the past, but the longterm downside of using these chemical nuclear bombs for the past hundred years is that most people are now born with only half of the types and numbers of friendly bacteria as they could and should have to help sustain a normal, healthy life and repel invading bacteria.

Very few people have heard that the friendly bacteria in your body battle with the invading bacteria. If you read medical literature you will more often hear that you need to boost your immune system in order to defeat invading bacteria. This is not wrong, it is just not the complete answer, especially when considering the fact that some types of invading bacteria actually hitch a ride on, live inside, and essentially "farm" the immune system cells, called macrophages. These macrophages are immune cells that the body actually sent to kill them! Boosting the immune system in this case only helps increase the spread of the infection! When this happens you better have a strong friendly army of the right types of bacteria to help kill them.

As the battle continues for months and years, every trick and everything the bacteria have learned is passed on as genetic information to the next generation of bacteria, via packets of genetic information called plasmids or sometimes called replicons. It sounds like something out the Arnold Schwarzenegger movie, "The Terminator." Each new generation of both the good and the bad bacteria are born carrying all the adaptations learned by its ancestors. Talk about super-soldiers!

Now consider the average probiotic supplement, of which there are many companies selling a range of friendly bacteria. These laboratory-grown bacteria grew up in complete isolation, with no challenges. They can be seen as green troops sent in to reinforce your battle savvy army. These probiotic bacteria don't know anything about your battlefield conditions (the tissue damage and altered pH and biochemistry of your body), they have not benefited from the lessons and tricks learned from years of battling it out with the invaders in your specific body, which is different than anyone else's body. Just like in real war, reinforcements are often needed, but to the seasoned soldiers, these new troops can't be expected to be that effective right off the bat.

These new troops and even your seasoned troops can get help from a special type of virus in the body called bacteriophages, the bug-looking things in the picture on this article. There are so many bacteriophages on the earth that if they were the size of ladybugs, they would completely cover the planet and would be several miles deep!

Bacteriophages can at times attach to the bad bacteria and infect them causing them to die or to jettison their plasmids (replicons), making the bacteria now much more vulnerable to the attack of your probiotic army. Unfortunately, little is known about how to get the bacteriophages to reliably help out in this way, although we suspect that as greater integrity and health is restored in the the tissues and systems of the body, bacteriophage activity increases. Since we cannot count on bacteriophages coming to the rescue, we need a better breed of enhanced probiotic soldiers. That is what the doctors at the Hansa Center for Optimum Health are working to develop.

While reinforcing with standard probiotics is better than not taking anything, I would want you to consider something. How long do you think you would need to take capsules of Salmonella, Staph, Borrelia, and so on, in an average American's already dysfunctional body? How long would it take before these bad bacteria would start taking over and overpopulating the body? Not long for certain! You would soon find yourself with an infectious disease as these bad guys overwhelm the few good guys.

So why do we rarely see friendly bacteria taking over in people who have been consuming probiotic supplements and fermented foods for months and years?


This is why many people find that they must continually take probiotics for months and years with often minimal effect.

As you can see by now, it takes much more than swallowing a broad-spectrum probiotic supplement in order to achieve the potential, near-miraculous benefits of targeted and enhanced probiotic therapy. There needs to be a very comprehensive and strategic battle plan, tailored to the unique global problems in your body.

I will continue this series and provide you with more information of things you need to know and strategies you and your doctor can use to combat virtually any illness. Many of these upcoming strategies can be done at home. Stay tuned for my next article, "Preparing the Battlefield."

For over 20 years the Hansa Center for Optimum Health, in Wichita, Kansas has specialized in the restoration of health for people with previously unresponsive and chronic illnesses of virtually all types. Over 85% of people come from other states and countries. If you have done everything you and your doctor know to do and are still struggling, contact our wonderful Patient Care Coordinator, Kara, at patientcare@hansacenter.com, for information on the exciting new treatments we have developed at the Hansa Center for Optimum Health. For additional info, visit our website at www.HansaCenter.com.

*Due to the exhaustive time spent per day with each patient, and poor repayment history of insurance companies, we unfortunately cannot accept insurance assignment. We do participate in Care Credit, and accept all major credit cards. We will gladly accept insurance when our elected officials revamp the health insurance industry to cover all results-based care. We encourage you to vote with this in mind. Please call 316-686-5900 ext. 1, for current pricing for our economically-priced, All-inclusive 2-3 weeks intensive packages of care.