Conventional medicine still has Lyme disease pegged as a bacteria problem. In reality, it is a disease rooted in inherited and acquired disturbances in many of the primary metabolic pathways in the body, setting the stage the for over-population of the various microbes now associated with Lyme disease. In other words, it is a condition predicated more by a person's biochemistry than by the presence of specific bacteria, although helping the body bring down the over-population of bacteria through frequency-specific treatments is still very important.

As noted by renowned author, and scientist, Otto Wolff, M.D. in his book on infectious disease:

"Antibiotic therapy, since it is concerned only with the sensitivity of the pathogen (bacteria), disregards the significance of the location of the infection. The affected organ tissue is obviously the weak link in the body's resistance, and if this is not taken into account, then underlying functional disorder remains untreated. The stage is thus set for recurrent, chronic inflammations of far more severe illnesses of the affected functional system."

Consider the illness diabetes, an illness that may seem obviously caused by excessive sugar consumption. According to the Department of Health and Human Services, the average American consumes almost 152 pounds of sugar every year, in 1970 it was still 123 pounds, so the average American has literally been been eating a ton of sugar every 13 years! That is 2000 pounds of pure sugar. Yet according to the Centers for Disease Control, the CDC, only 9.4% of Americans have diabetes.


I am a firm believer in what I have seen in thousands of cases, as well as from the publications of the often quoted cell pathologist, R. Virchow, holding that, "knowledge of the bacteria, necessary as it is for a full understanding of the origination of the disease process, still by no means explains the process itself (metabolic disturbances), nor renders a distinct investigation of it superfluous."


Most People are on the Verge of Becoming Sick


An estimated 133 million or 45% of Americans suffer from a chronic illness. Another 45 million suffer from mental illness. The CDC reports that 48 million get sick every year from foodborne infections. By some estimates there are 300,000 new cases of Lyme disease every year, although this number is likely much larger due to poor reporting and testing.


It would seem that illness is just our lot in life, especially to those that believe there is nothing beyond pharmaceuticals and their drug-induced remissions. Thankfully it is evident to many scientists and forward-thinking doctors that is not the case in Lyme disease or other illnesses.

Leading scientists and doctors feel that there are many more people, likely a large segment of the world population that have the various bacteria that make up Lyme disease, yet never experience any of the symptoms. As prevalent as Lyme disease may seem, the vast majority of people with the "infection" do not have the disease. Scientists and research-minded doctors are pursuing this situation to identify what those who are affected are missing, compared to the healthy ones that do not manifest the disease.

Illness is not our lot in life, if we shift the treatment goals from the antiquated and disastrous antibiotic and symptom-suppressing methods, to the latest treatment that seeks to restore the optimum metabolic pathways through genetic and epigenetic testing and modifications to the expression of these key predisposing factors in the development of disease.

We know intuitively if we take care of ourselves, eating well, exercising, and living well, that we feel better and get sick less often. Take that concept much further and imagine doctors striving to add to those things, and actually identify all the locations your metabolic pathways are blocked. These biochemical pathways control your mood, emotions, cognition, the ability to breakdown and eliminate toxins, the overgrowth of microbes, wake and sleep cycles, arousal and ability to rest your mind - everything!

With the unveiling of the Genome Project by the international scientific community in 2003, the sad realization hit the world of illness like a ton of bricks, that most illnesses would not be cured by means of gene manipulation. Thankfully the scientific community kept researching and in 2010 joyfully announced the results of the ENCODE Project, the discovery of 4 million epigenetic switches that controlled the expression of the DNA, and were ultimately regulating every biochemical metabolic process in the body.


Finally, the true underlying predisposing factors to every illness known to mankind had been found. The next step was to develop technologies to access the software that controls those switches and ultimately controls your health.


The reality is rapidly becoming clear that the future of medicine will be tapping into the body's energetic software, literally plugging into the bioinformation system through energetic testing, much like your car mechanic plugs into your car's computer to diagnose problems in the engine.


Much of the energetic testing research has been done by clinicians, many who are Doctors of Chiropractic Medicine, since by training and philosophy their treatment goal has always been to free up or restore the self-organizing, self-healing mechanisms throughout the entire human organism.

These leading edge scientists were, and still are often persecuted by mainstream medicine and governmental regulatory agencies. Thankfully these energetic discoveries are now being given credence, albeit slowly.

Indeed, all of the energetic testing systems of the world have advanced our knowledge of and ability to access the bioinformation system of the body including but not limited to: acupuncture, applied kinesiology, clinical kinesiology, electrodermal testing, microcurrent testing, and now BioResonance Scanning, and it's latest advancement, Fractal Frequency Modulation.

The EM signatures of pathology of any type are encoded in the bioinformation system of the body. Electromagnetic sentences are being posed to the body in real-time testing, such as BioResonance Scanning (BRS) and Fractal Frequency Modulation (FrFM) that appear to be able to detect the pathology in question, and through sequenced testing backtrack the pathology to its primary metabolic points of origin.

Once the key pathways are identified, each step in the biochemical pathways can be tested to determine where the blockages are occurring, (see the example of these pathways in the figure below) likely from epigenetic-induced enzyme deficiencies as well as key mineral and nutrient deficiencies, which may also be from other remote pathway disturbances. 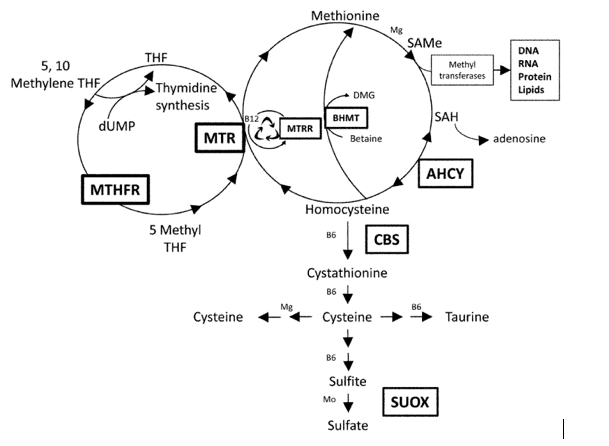 Having identified what the interference is, more specific sequenced testing can then be done to identify the corrective treatment that is needed by the body to cause the epigenetic switches to orient themselves to correctly regulate that point in the pathway, possibly for the first time in the person's life.

It is fascinating to see that often all the body needed was a specific, one-time application of a bioenergetic therapeutic input to open up the pathway, as manifested by the rapid disappearance of the EM signature of pathology and improvement of the person's symptoms.


As each of the predisposing metabolic pathways are cleared, the bacterial frequencies disappear, seeming to fade into the normal microbial collective that is always present, even in a healthy subject.

It appears that treating to kill the bacteria, whether with antibiotics or natural remedies is misguided at best and at the worst further disrupts the metabolic pathways leading to the development of chronic illness and increased suffering.

Call Hansa Center today to finally identify the real reasons you are sick.

For over 20 years the Hansa Center for Optimum Health, in Wichita, Kansas has specialized in the restoration of health for people with previously unresponsive and chronic illnesses of virtually all types. Over 85% of people come from other states and countries. If you have done everything you and your doctor know to do and are still struggling, contact our wonderful Patient Care Coordinator, Kara, at patientcare@hansacenter.com, for information on the exciting new treatments we have developed at the Hansa Center for Optimum Health. For additional info, visit our website at www.HansaCenter.com.

*Due to the exhaustive time spent per day with each patient, and poor repayment history of insurance companies, we unfortunately cannot accept insurance assignment. We do participate in Care Credit, and accept all major credit cards. We will gladly accept insurance when our elected officials revamp the health insurance industry to cover all results-based care. We encourage you to vote with this in mind. Please call 316-686-5900 ext. 1, for current pricing for our economically-priced, All-inclusive 2-3 weeks intensive packages of care.