Are you convinced no doctor can help you? 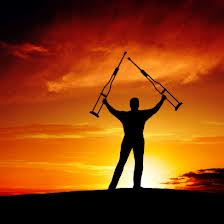 I suppose it is only natural to think the illness you are suffering is worse than anyone else, especially after you have seen many different types of doctors with no help.

When we do new patient consultations, people often will say, "Are you sure you have seen someone as bad as me?" Often the next question is, "What is your success rate?" Both are great questions.

In twenty years of specializing only in the treatment of the toughest cases of all types, it is almost impossible that we haven't seen as tough, if not tougher cases. Some of our patients have seen over a hundred different doctors of all types, often in multiple countries, many have been given only two weeks to live, yet lived years beyond.

The success rate question is more difficult to answer. As different as you look on the outside from everyone else in the world, so are you as different on the inside of your body. This is why even aspirin only works as a "cardio-protective" agent for one-third of the people. Two-thirds of the people taking aspirin to protect their heart, break down the aspirin differently and the aspirin is doing nothing to protect the heart.

Still, we must strive to answer the question as best as we can, especially when the internet is full of doctors and clinics claiming they have the answer for you.

How better to answer the question of just how good our healing techniques and treatment philosophy is than testing it out on people who have been declared, "incurable?" If you can help the people that no doctor has been able to even shift one symptom on, and do it in just two weeks, without prescriptions, and without thousands of dollars of special blood tests, and using only natural methods, that would be pretty significant! So that is what we did at the Hansa Center.

The Hansa Center for Optimum Health, in Wichita, Kansas, did what is called an "Case Outcome Review" on 29 people who were verified to have previously non-responsive illnesses of any type. To be included their medical records had to prove that every treatment they had tried had failed to improve their condition and/or their symptoms had only gotten worse. Essentially all of the participants were proclaimed "incurable" by their previous doctors.

In summary each of the 29 people had an average of 13 major symptoms that had persisted an average of 11 years. It is amazing to realize in these twenty-nine people, the group had a total of 385 symptoms, but even more amazing is the diversity of types of symptoms. There were 145 different major symptoms in the group! (See the full report for a full list of the individual symptoms. Are your symptoms in the list?)

With the primary purpose of treatment to restore the optimum integrity and function to every tissue in the body, and the function of every system in the body, using only our innovative testing and treatments, here is how the group responded.

Out of the 385 symptoms in the group, at the end of just ONE WEEK of treatments, 71% of symptoms had improved! IN JUST TWO WEEKS of daily treatments (Monday through Friday), 85% of the symptoms were reported by the patients as improved!

You might say, "Improved is not saying much!" However remember, none of their symptoms had improved in eleven years, even with high-power prescription and natural treatments of all types.

Okay, it gets better...after just two weeks, literally on the last day of the two weeks, 45% of the group's major symptoms were reported as GONE! That is 174 symptoms in the group that were no longer there, not just improved, but gone.

It is amazing how rapidly things can shift when we stop treating the symptoms and effectively address the entirety of the body in these powerful, yet gentle treatments. It might surprise you to know that 110 symptoms were reported by the 29 patients as not there anymore after just the first 5 days of treatments. That is fast!

Just like there are many strains of microbes, there are many strains of people, you are unique in the universe. Our methods address your uniqueness. No "canned" treatment protocol will address your uniqueness. You are much more than just the label a doctor gave your illness. All illness is a breakdown of every system in the body. It is never just a bacterial, viral, mold, or other thing. Those things cannot thrive and cause disease in an optimally healthy body. Are they all a challenge to everyone, of course, but we are a living, eating, breathing microbial soup. It is not the absence of microbes that creates these dramatic changes in our patients. It is the restoration of health at every level and enabling the body learn to do the work that brings down the over-population of the bugs.

It has been reported that 88% of all conventional medicine treatments address an illness by seeking to suppress the symptoms through pharmaceutical drugs or invasive interventions. This is the definition of the Allopathic Medicine philosophy. Allopathic Medicine’s philosophy treats pain with pain-relievers, allergies with antihistamines, infections with antibiotics, depression with antidepressants, and so on. Due to the fact that the symptom suppression treatment never seeks to identify the interfering causative factors the best that can be hoped for with this philosophy is drug-dependence and remission of symptoms.

The results of this short case study demonstrate that it is possible to enable often rapid and dramatic improvements by seeking to restore the health and integrity of the whole organism. With the goal of true restoration of health, the patient does not need to continue with years of treatments, chasing every infection, or continue taking medicines, supplements, or remedies in order to continue feeling well. Share
Posted by Biologix Center