Taking a Flying Leap Off a Bridge! By: Dr. David Jernigan 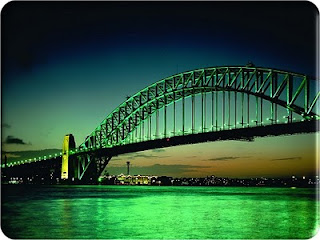 I want to tell you a story I once heard that really brings the point to many of the articles I have published to date.


A top student at a prestigious medical school and his favorite professor were walking along a jogging path beside a river outside of the university. The student was very pleased to have this individual time with his professor outside of the classroom environment.

Suddenly they heard cries for help! They looked and saw a man drowning in the river. The student kicked off his shoes and jumped into the river. With much strain and effort the student fought the river current and dragged the now unconscious man onto the riverbank and began CPR. An ambulance had been called, which by the time it arrived the drowned man was breathing again through the heroic efforts of the student.

As the ambulance drove off with the man, the student felt pretty puffed-up, proud to have been able to show off his abilities to his favorite professor. The student glanced at his professor as they continued their walk along the river, but the professor didn’t seem impressed.

A short while later they happened upon another drowning man, and again the student saved him at great effort. Still no great reaction from the professor, who simply acknowledged the job as well performed.

As they continued their walk, the student through great heroic effort had to save two more people from drowning. As he dragged the last victim from the river, he looked up at his professor and exclaimed, “I don’t know how long I can keep doing this – I’m getting exhausted!” The wise professor said, “Then you might want to run up ahead and stop the guy who is pushing these poor people off the bridge.”

This is the way I used to feel in my clinic. I could save many people from certain death through great personal effort, but it was never ending. I was tired and frustrated at trying to save people who were being thrown into the “river” by the ignorance and by the misguidance of politically and economically motivated dictocrats of physical, mental, and spiritual health. I mean, does anyone really believe that they are having pain due to a deficiency of aspirin? Or that margarine, which is only missing a couple of ingredients from being axle grease really promotes better health?

There truly is no shortage of sick people. A doctor reading this may think that no one is interested in true balanced living. That everyone is just interested in the quick-fix. I predict that if doctors become masters of balanced living; and reorganized their clinics to practice natural Biological Medicine, that people would come out of the woodwork to be a part and learn for themselves the art of living a higher quality of existence.

Save yourself! Get educated in natural ways to prevent getting sick in the first place. Look around and see that millions are dying in spite of all the drugs, vaccinations, and surgeries. Preventive measures are key to health and longevity!

Dr. David A. Jernigan is the founder of Hansa Center for Optimum Health in Wichita, Kansas Share
Posted by Biologix Center

I admire the valuable information you offer in your articles. I will bookmark your site!!